skip to main | skip to sidebar

It is nice to have kitties surrounding you in these cold days. Sasha is on my lap keeping me warm. : )
Posted by FuzzySiberians at 07:25 No comments:

We have one Siberian male available. 3 months old and ready to go to a new home. What a great addition to your family for 2012?

Contact us for more info.
info@fuzzysiberians.com
Posted by FuzzySiberians at 10:21 No comments:

Kitties got their first round of shots!

Just got back from the Vet. The folks at the University Hills Animal Hospital are great people. The vet said all of the kittens are healthy. They got their first round of shots, and some loving as usual.

Everybody at the hospital loved them. How couldn't you? This was their first car ride and none of them cried which is awesome.

One male is still available.
Posted by FuzzySiberians at 14:36 No comments:

Now that our Siberian kittens are 8 weeks old, they are full with energy. There is an endless playing going on. : )

Two of them are still available. Contact us for more information.
Posted by FuzzySiberians at 08:23 No comments:

The Elephant in the Living Room


Last night, I watched a movie called "The Elephant in the Living Room". It pisses me off so bad when I see these people who have no respect for animal life and dignity. This stupid human being gets two lion cubs, locks them up in a horse trailer for 4 years, and lets them breed. The male lion who is one of the most gorgeous animals I have ever seen escapes. Luckily, they get him back before he gets shot! Out of the 4 cubs, one dies the next day. They live in this most humiliating, and unhealthy environment ever. Moreover, the owner videotapes instead of helping while the male lion gets electrocuted for 15 agonizing minutes because of a nearby freezer's cable. He howls for minutes and finally gives up and lays down on this mud covered floor. The cubs and the female watches all this tragedy unfold. The King falls in this pathetic cage because of some stupid ignorant man. This man literally waits until a tragedy strikes before realizing what kind of situation he put himself into. Finally, one of the rescue officers convinces him to seek help. Sophie, one of the cutest cubs ever dies right before they are rescued at the age of 11 months.

I f***g take days off from my work whenever we have a new litter. We literally watch them 72 hours none stop to make sure our kittens survive. It is the most nerve wrecking experience to watch them born and wonder if they are ever going to survive. People like this make me sick! It sucks to know that people like this even exists. They have no respect to meaning of life. Everything is all about "them".

The movie even shows these exotic animal fairs, where you can buy all sorts of animals from "2 week old" pumas to hyenas. A two week old puma needs her/his mom. I am really pissed and there is no word to describe it.

Now they live like they should in Wild Animal Sanctuary in Colorado.
http://www.wildanimalsanctuary.org

Lacie, Tabitha & Sampson: Private Owner Surrender – These three African lions were rescued by the Sanctuary after the mother (Lacie) and an adult male were discovered living in a horse trailer in Ohio. The adult male lion and Lacie (an adult female) had been kept in the horse trailer for years, and their owner had not prevented them from breeding – so Lacie gave birth to 3 cubs while still living in the horse trailer. An Ohio animal welfare agency stepped in at this point to move the lions into an outside cage in order to help protect the cubs, but the adult male, and one of the cubs ended up dying anyway – so the Sanctuary came to rescue the remaining three (Lacie, Tabitha & Sampson).

I decided to donate couple thousands bucks to this organization. Even our vet bills are like car payments so I cannot imagine the cost of taking care of animals varying from Lions, Leopards, to Grizzly Bears among others.

Posted by FuzzySiberians at 12:07 No comments: 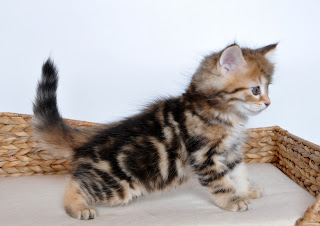 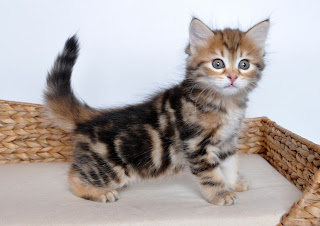 We are getting another female. She is definitely gorgeous.
Posted by FuzzySiberians at 06:46 No comments:

Baby sitting is so much fun

We have been baby sitting Zoey and Sophie. It's great to have them back even for two weeks. We definitely miss them and it is so much fun to have them around.
Posted by FuzzySiberians at 06:43 No comments:

Kittens were running all over the place. Now that they are tired, it's about nap time. One of our little monsters is available. Contact us for more information.
Posted by FuzzySiberians at 14:03 No comments:

Fuzzy Siberians: Kitty Purr
Posted by FuzzySiberians at 12:51 No comments:

First kitty purr of this litter has been confirmed. We have a purring 1 month old Siberian kitten. They are all out of their den. They even started eating food.

Posted by FuzzySiberians at 12:50 No comments:

Venus was panting heavily yesterday afternoon. So, we all assumed our positions, and got ready for the delivery. After a few hours, she came out of her den. She did not let us sleep last night. She has been very anxious, jumping in and out of our bed. No kittens yet! Hope everything will be fine.
Posted by FuzzySiberians at 12:01 No comments:

Venus is pregnant. We will have our first litter of 2012 soon. Please contact us if you would like to reserve your own Fuzzy Siberian.
Posted by FuzzySiberians at 08:41 No comments:

Little ones out in the cold 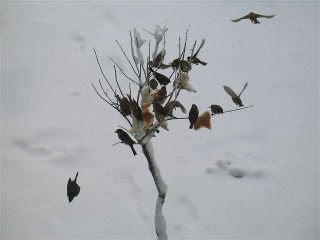 Please don't forget / ignore the little creatures outside trying to survive the cold winter. I am sure they will appreciate to even some tiny pieces of bread crumbs.
Posted by FuzzySiberians at 14:30 No comments:

Happy New Year to all Friends.

Have a wonderful 2012. We will be growing for sure. We plan on adding two more females to our program while retiring our wonderful Katja.

It will be a busy year.
Posted by FuzzySiberians at 13:32 No comments: